This post may contain affiliate links. Please read our disclosure policy. As an Amazon Associate, I earn from qualifying purchases.

Nothing livens up your Turkey Day or a festive holiday feast like this Traeger smoked cornbread stuffing. Perfectly blending hearty sausage with rich spices and comforting cornbread, this delicious dish is a complete delight. It’s particularly popular during Thanksgiving, but no matter the occasion or holiday, your guests are bound to appreciate every crunchy yet tender bite. Yup – this recipe does both.

Since cornbread can be on the sweet side, this Traeger smoked sausage stuffing recipe mellows things out with onions, celery ribs, and a decent serving of broth for a savory crunch that’s not too salty.

The fact that it’s made in the Traeger also gives it a delicate smokiness that you simply won’t get from a regular oven. Basically, it’s a winner on all fronts!

With its moist filling and classic golden top, this is a smoked side dish that you’ll be pulling out for years to come. Just make sure you bookmark this page or pin or for later, as this recipe promises to transform any festive spread. Trust me, it’s a game-changer!

💪Why This Recipe Works

You just need a few ingredients to make this Traeger smoked cornbread stuffing come to life. Scroll down to the printable recipe card for all the details

Putting this delicious stuffing together couldn’t be simpler! For detailed step-by-step instructions for this recipe, scroll down to the printable recipe card.

Spread the cornbread cubes on a large baking sheet or two smaller baking sheets. Dry and toast the cubes on the Traeger grill.

Cook the onion and celery until soft. Add the herbs and spices.

Combine the cornbread, sausage, and vegetable mixture in a bowl. Mix the broth, half and half, and eggs together, then pour into the bowl with the stuffing mixture.

The difference between cornbread stuffing and dressing is technically how it’s cooked. To clear things up, stuffing is cooked inside poultry while dressing is cooked in a pan. A dressing is also served separately and is typically used to “decorate” the turkey. These days, this idea isn’t usually observed – it’s a free for all!

Should you dry out cornbread stuffing?

Dried-out bread or croutons usually works best when making stuffing. This stops your stuffing from getting mushy and allows it to absorb liquid easily.

Should I cover stuffing when making it?

For this recipe, you don’t need to cover your stuffing. Just place it on the Traeger and get cooking!

How do you stop stuffing from getting mushy?

Don’t overmix! The secret to a gorgeous texture that doesn’t turn to mush is gradually adding your stock, using crisp cornbread squares, and allowing the stuffing to sit in the fridge before baking. The stuffing trifecta if you will!

Can you reheat this Traeger smoked cornbread stuffing?

You can. Simply bring it to room temperature and bake it in the oven or Traeger at 350°F for 30 minutes, or until the internal temperature is about 165°F.

Bake the stuffing in the Traeger on a lower heat for the first 25 minutes to give it time to get infused with a smoky flavor. Finish it at a higher heat to get a crunchy crust on top.

If you click on some of the following affiliate links and buy something, we might get a small commission. You don’t pay any extra, but it will help us keep the lights on and our bellies full!

🍗What Else Is Cooking?

Need some Turkey Day ideas? I absolutely love to smoke a turkey on the Traeger for the holidays, but I have also made some killer turkey dishes in my air fryer. Here are several recipes to try for your next gathering.

Need a dessert for your holiday party? Try any of these incredible desserts.

Whether you need a centerpiece for Thanksgiving and Christmas or simply want to dial up a traditional turkey roast dinner, this Traeger smoked cornbread stuffing is a total slam dunk. As it requires just a few minutes to prep and can be left to sizzle away in the Traeger, it’s a simple but scrumptious addition to any turkey dinner.

💬Tell Me What You Think!

CONNECT WITH A LICENSE TO GRILL!

Be sure to follow us on our social media accounts.

Did you make this recipe? Tell us about it in the comments below!

As an Amazon Associate and member of other affiliate programs, I earn from qualifying purchases.

Nutrition information is a guideline only, is calculated automatically by third party software, and absolute accuracy is not guaranteed.

Did you make this recipe? 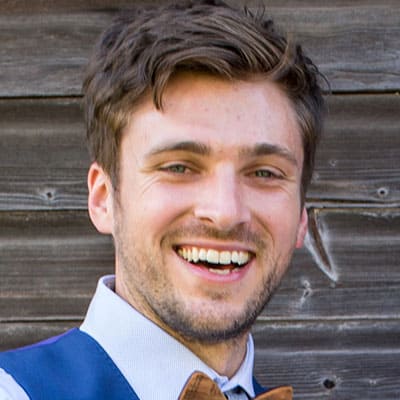 Welcome to A License To Grill. You will find tasty, easy to follow recipes that have been happily tested in our home before being shared with you. With almost two decades worth of experience on the grill, my passion is food and outdoor cooking. My hope is that you find your next favorite recipe and create forever memories with loved ones while enjoying it! Cheers!

Get fresh recipes and fun tips delivered to you directly!